Ceduna-born Chris Sperou, 82, is one of Australia’s most daring stunt pilots.

While most people in their 80s are enjoying a life at a milder pace, there are always the rare exceptions who buck that trend.

With the fortune of good health on his side, there is no desire to slow down for Chris Sperou.

The 82-year-old has been flying aeroplanes for more than six decades, but it is the way in which he flies that leaves many in awe.

Mr Sperou is rarely straight and level — even on takeoff he rolls inverted just several feet from ground.

And his method of learning was anything but conventional.

“Basically, I was self-taught,” he said with a grin.

“The instructor would say ‘go out and do some revision and come back’.

“I’d go out and put the aeroplane through its paces, so all the advanced [aerobatics] was self-taught”.

Watching aircraft turned into taking the controls when he was 21 at Parafield Airport, in Adelaide’s north, and he took to it like a duck to water.

“I went solo in only a few hours and quickly engaged in unusual attitudes,” he said. 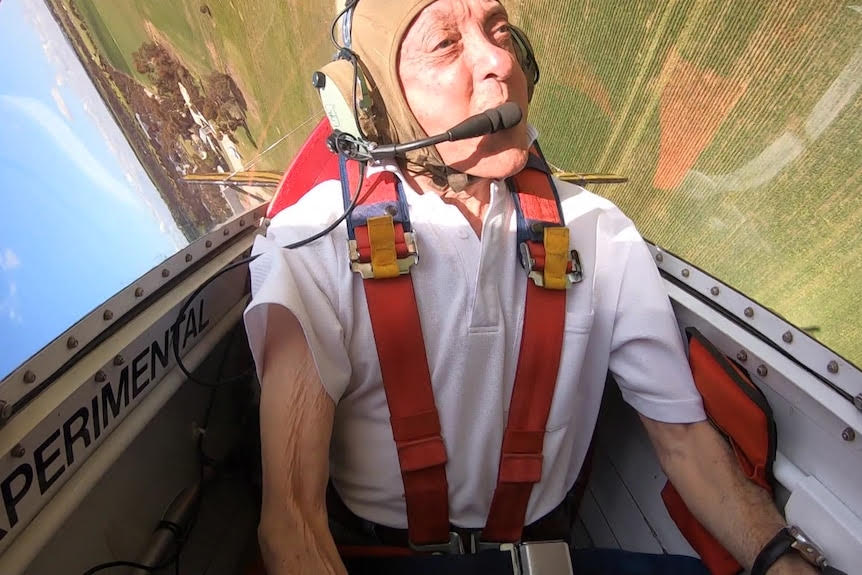 Mr Sperou said he wants to continue flying for as long as he can.(

Those manoeuvres of putting the plane upside down with little experience was certainly a rush.

“I came down seeing stars occasionally … pushed too hard or pulled too hard,” he chuckled.

His skill has taken him to the top of his sport, representing Australia at the World Aerobatic Championships six times and winning a swag of accolades locally.

To be able to do what Mr Sperou does takes an enormous amount of strength.

“Because I’m used to it, you don’t feel it. When you land you feel a bit tired because it’s pretty tough on your body.

“Your body stretches, I don’t know how far, but it does.”

For Chris, flying has been a form of therapy as much as it has been a profession.

“You leave all your earthly problems behind; you’re so focused on what you’re doing, it’s like ballet in blue.

“There’s nothing else, you can put the world where you want it up there and it’s a great sensation.” 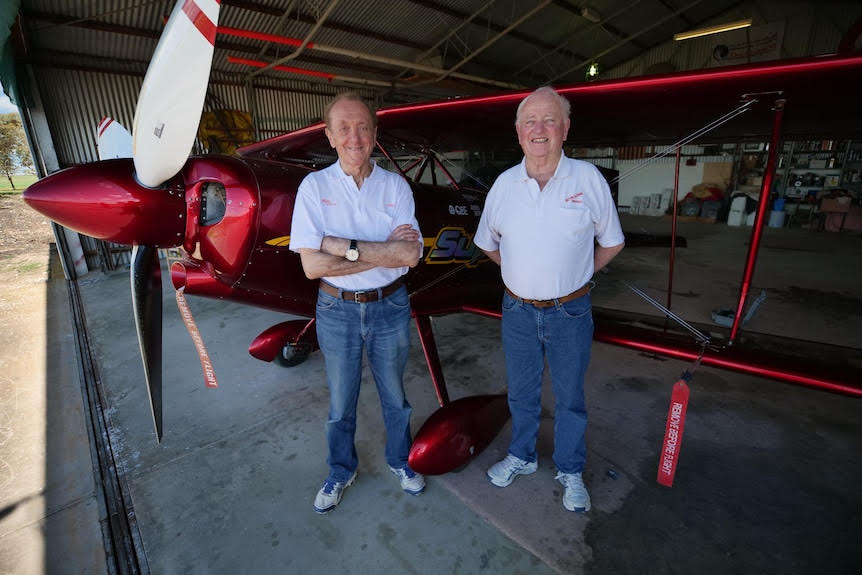 Mr Sperou (left) and his friend and fellow pilot, Warren Stewart, have been performing air shows together for 30 years.(

For the past 30 years they have perfected routines in formation, flying just feet apart from one another.

“Between the pair of us we have to have this very close reliance on each other and confidence which we got pretty well right from the start,” Mr Stewart said.

“We’ve kept that now for all these years.”

And after all their time flying, Mr Stewart still gets as much enjoyment out of it now as he did when the pair began.

“This is not a job, this is probably a super hobby,” he said.

With such a rich history together, the men have no plans to give it away.

“People ask me that, they say because of your age how do you keep going? Buggered if I know,” Mr Stewart said.

But Mr Sperou knows that time will come one day.

“When I’ve got to start thinking about it while I’m up there doing it, [it’s time to] give it away,” he said.

Until then, he’s happy to keep turning his life upside down.